Volocopter, the pioneer in urban air mobility (UAM), and Kakao Mobility (KM), South Korea’s largest mobility platform company, have signed a MOU to conduct a feasibility study on introducing UAM in South Korea.  The findings will lay the groundwork for possible future cooperation between both companies to launch UAM services in South Korea, which plans to commercialize the service by 2025.

Volocopter, the pioneer of urban air mobility (UAM), flew at the Experimental Aircraft Association’s (EAA) AirVenture 2021 in Wisconsin. The Volocopter 2X flight was the first ever public crewed test flight of a fully electric vertical take-off and landing (eVTOL) air taxi in the US. This successful flight marks a key milestone in Volocopter’s plan to raise awareness of air taxis among populations around the globe and is critical to the long-term success of delivering advanced air mobility (AAM) and urban air mobility (UAM) solutions.

The crewed Volocopter 2X took off at 2:45 PM CST for a 4-minute flight at ~164 ft and a top speed of 18 mph over Wittman Regional Airport as part of EAA’s AirVenture aviation celebration. 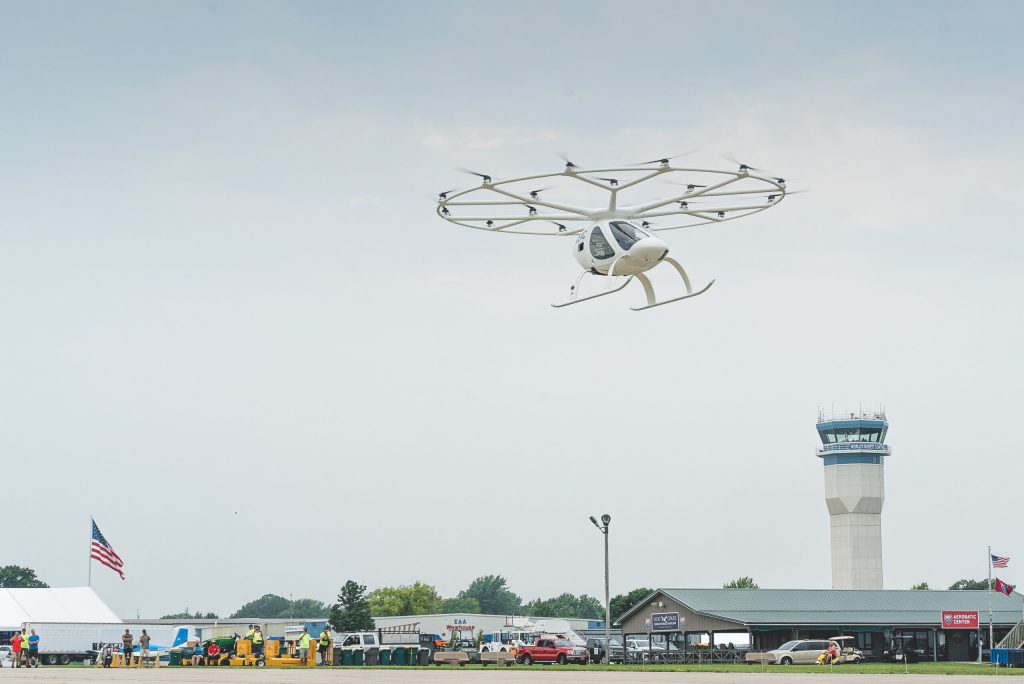 Event attendees were able to watch the Volocopter 2X fly and take a seat in the VoloCity model at Volocopter’s booth to experience these aircraft. Nicknamed the “World’s Greatest Aviation Celebration,” more than 600,000 visitors are expected to come to see pioneering designs in action.

– Superior construction technology, with a pure carbon fiber superstructure, a D2P hull with wave piercer, and reduced noise and vibration

– Side garage for tender and jet ski

– Two big beach clubs in the stern and bow

The Azimut Grande 35 Metri is the new flagship in Azimut Yachts’ most exclusive line, the Grande Collection. Drawing on Azimut carbon fiber technology and the expertise of Stefano Righini, who defined the concept and designed the exteriors, the yacht offers unprecedented solutions for a boat this size, representing a masterpiece of style and space.

The yacht has a Wide Body with Raised Pilot House (RPH) and supremely sleek exteriors, featuring exceptionally sized full-height windows in both the bow and salon. Unique in this category is the option to add an additional sundeck (almost 30 m2) on a third level, with access from the upper deck in the stern. This solution doesn’t affect the balance of volumes and retains the model’s overall dynamism.

The Azimut Grande 35 Metri delivers the best build quality in its category. The entire superstructure and hardtop are made from pure carbon fiber, which Azimut uses with great success to increase the volume of the structures, and so to offer more space and comfort, but without adding weight to the boat. Epoxy, the non plus ultra of resins, is used alongside the carbon because it has superior mechanical characteristics to the resins normally used.

Ambulance use surged in 2020 because of the Covid-19 pandemic, even as emergency medical service providers struggled due to the revenue hit they took from delayed and canceled elective procedures. While we’re fervently hoping that far fewer people will need ambulances this year, there may soon be a whole new means of emergency transportation, at least in New York: flying ambulances.

Israeli aerospace company Urban Aeronautics announced this week that it sold its first four vertical takeoff and landing (VTOL) aircraft to Hatzolah Air, a nonprofit emergency medical air transport provider based in New York. The organization already operates fixed-wing aircraft (meaning propeller-driven or powered by a jet engine, with wings that don’t move) as part of its emergency missions.

Aerospace brand Virgin Galactic has unveiled a concept for a high-speed passenger aircraft called Mach 3, which could travel at three times the speed of sound.

Featuring triangular delta wings, the aircraft would be capable of travelling at Mach 3, or 3704 kilometres per hour, which is three times the speed of sound.

“I am proud of the Gulfstream team that worked diligently to build on our excellence in cabin comfort,” said Mark Burns, president, Gulfstream. “Behind this award is a team of the industry’s most talented engineers, designers and craftspeople, who combined innovation and artistry to create a seat that is both comfortable and beautiful. It’s a perfect complement to the Gulfstream Cabin Experience that enhances wellness and increases productivity.”

Japan Airlines (JAL) and Volocopter GmbH (Volocopter) entered into a cooperation agreement to promote the development of the urban air mobility industry for next generation air transportation options of passengers and goods.

In February 2020, Japan Airlines Innovation Fund invested in Volocopter, which is aiming to create and bring next-generation electrically powered air taxis and heavy lift cargo drone technology to the market, as part of their Series C funding round. With this agreement, JAL and Volocopter will strengthen their partnership to jointly explore business opportunities for air mobility services, specifically Volocopter’s eVTOL technology, in Japan.

Our commitment to you!

During these times, it is important to look out for our health.
Flying private helps you avoid large crowds and long lines, minimizing your exposure to other individuals.
When flying with us, you can be sure that you are flying the cleanest, safest, and most efficient way.

Our promises to you!

At the end of the Second World War, Roy Grumman, co-founder of Grumman Aircraft Engineering Corporation, envisioned for the first time the development of a business aircraft, different from the robust models used during the War, in hope that they will facilitate the post-war economic boom.

Thirteen years later, Grumman introduced an aircraft that would later revolutionize general aviation and position his company as an industry pioneer – Gulfstream I.

Nowadays, Gulfstream produces the most advanced business aircraft in the industry and continues to maintain its reputation for excellence and innovation.

Gulfstream G280 is a super-midsize aircraft, a leader in its class in terms of performance and economy. It can accommodate up to 10 passengers and it is the only aircraft in its category that can operate a non-stop flight between London and New York, in record time.

Recently, Gulfstream Aerospace Corp. also announced the fact that the G280 aircraft will have access to the fastest, most reliable worldwide communications network available for midcabin business jets, the Viasat Ka-band system.

Another flagship for the American producer is the Gulfstream G650ER, an aircraft that set new standards in terms of flight autonomy for its category – 13.890 km at Mach 0.85 – a performance that no other business aircraft in the world can achieve.

Therefore, G650 opened a new window of opportunities in terms of nonstop flights, connecting cities such as Dubai and Atlanta, Hong Kong and New York or Los Angeles and Melbourne.

The production and design of the aircraft take place at the Research and Development Centre in Savannah. The five buildings inside the campus bring together engineers and specialists that work together on all essential process, starting from engineering, manufacturing, testing and development for the entire Gulfstream fleet.

Besides innovation and performance, two principles that guide the entire activity of Gulfstream, customization is also extremely important. Those who choose to invest in a private jet made by Gulfstream have the possibility to customize the interior up to the smallest details. Starting from the cabin configuration, furniture colours, choice of fabrics and dinnerware, everything can be planned inside one of the company’s design centres in Savannah, Dallas, London or California.

Recently, the company also opened a new design centre in Manhattan. The space features dynamic digital tools and thousands of material samples that help launch the customization and personalization of every Gulfstream aircraft.

Besides these services, Gulfstream also operates the largest factory-owned service network in the business aviation industry. The support system is anchored by 11 service centres strategically located on four continents, including the world’s largest purpose-built business aircraft maintenance facility in Savannah, Georgia. Gulfstream is also the first manufacturer to open a service facility on mainland China at Beijing Capital International Airport. In addition to the fixed service locations, Gulfstream has Field and Airborne Support Teams (FAST) to provide mobile support.

In Romania, Gulfstream is present through private jet brokers and it carries long and medium-range flights to destinations such as Dubai, Abu Dhabi, Moscow, London or New York.

In 2018, Gulfstream participated to a static show on the Baneasa Aurel Vlaicu airport in Bucharest. Aviation fans, as well as those interested in investing in an aircraft had the chance to admire the G550 model.

In fact, more and more managers and important entrepreneurs in Romania use private jets to facilitate travelling between different work locations, to meet with partners from other countries or to participate in various important events without blocking a few days of their agenda.

The advantages of a private flight reside in both time and utility, but also in comfort and the impression that one can make on their business partners. Also, for many destinations there aren’t many options in terms of commercials trips, so the ability to schedule a flight according to your needs becomes a valuable asset.

The time spent on board of the aircraft is also important, especially since the newest models, such as the Gulfstream G500, feature intelligent air circulation and light management systems, that help prevent jet lag and tiredness.

Moreover, the cabin works as a real office, offering high speed internet connection and a peaceful environment in which the traveller can work without any distractions.

There are plenty of other advantages, that begin even before boarding and continue after the flight is over. Check-in procedures are facilitated, there is no waiting time for luggage and no delays.

In 2019, Gulfstream will bring the G500 aircraft to Romania, as part of an official worldwide tour.